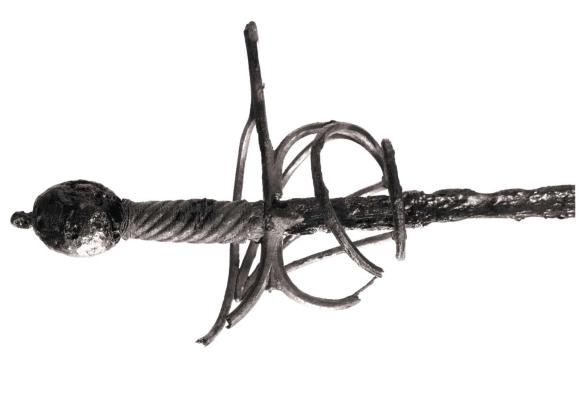 Rapier
To find out more click on the image above

Explainer: The Columbian Exchange
By 1622, Spain was deeply involved in the Thirty Years’ War (1618-1648), which took place not only in Europe, but on the high seas and in the shipping lanes of the Atlantic and Pacific. Spain’s enemies, including England, Holland, and France, aspired to wealth-producing colonies of their own but, until they could establish outposts, they made do with attacking Spain’s fleets as they made their way to Europe, laden with valuable cargoes.

The fleets were prepared for trouble. Guard vessels, usually the larger galleons, were heavily armed and also carried soldiers. Smaller ships depended on these defenses for their safety. Infantry as well as artillerymen were trained to defend the ships from attack.

Bartolome Garcia de Nodal was in command of the troops aboard the Nuestra Señora de Atocha, which was the 1622 fleet’s important rearguard. He would have coordinated his orders and strategies with the ship’s captain and other senior officers.

De Nodal was a well-known and highly regarded figure in the Spanish maritime system. He was born to Amaro de Montemeán and María Nodal in Pontevedra in 1574. In 1590, at the age of sixteen, he joined the Spanish navy, and within just a few years he was given command of captured prize ships. A talented officer, he was soon put in charge of various Spanish ships and fleets. He saw military action in the eastern Atlantic, the Mediterranean, and the Indies against Spain’s various enemies.1

In 1618, King Philip III received word that Dutch explorers had navigated a passage from the Atlantic to the Pacific at the southern extreme of South America. While finding the route was good news for travel in the Spanish Empire, it was bad news that the Dutch were snooping in Spanish territory. The strained relationship between Spain and Holland had degenerated into open warfare.

The king ordered Bartolome and his brother, Gonzalo Garcia de Nodal, to organize an expedition to verify the new route and to bring back as much information about the area as they could gather.

The brothers left Spain in two ships in late September of 1618, and they returned in July of 1619. 2  Their voyage had been a complete success: they not only charted Tierra del Fuego and the islands and passages around it, they also discovered (and named) the Diego Ramirez Islands, which were to be the southernmost known lands for the next 150 years. The Nodal explorations gave Spain a new understanding of the southern reaches of its American empire. In 1621, the brothers published an account of their voyage, and the title page bears an engraving of Bartolome—the only known contemporary image of any person onboard either the Nuestra Señora de Atocha or Santa Margarita.

Bartolome’s next command was to lead the troops onboard the ill-fated galleon Nuestra Señora de Atocha that was part of the Tierra Firme (South American) Fleet. He drowned when it sank in the Florida Keys on September 5, 1622. On October 13th of that same year, Gonzalo Garcia de Nodal also died in a shipwreck while traveling to Chile via the passage he had discovered with his brother three years earlier. 3