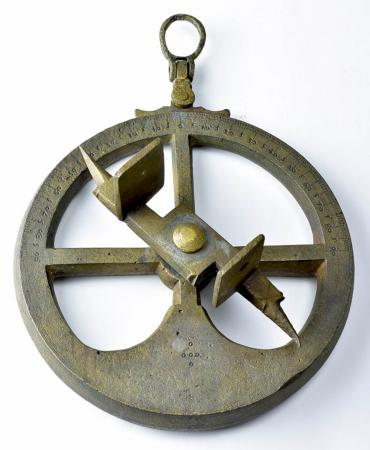 Astrolabe
To find out more click on the image above

Explainer: The Mariner’s Astrolabe
Francisco Cárdenas de Garay was a native resident of Seville and the son of Gaspar Sánchez de Cárdenas and Inés López. He successfully completed his pilot’s examination in 1609, for Tierra Firme Fleet which served South America and parts of the Caribbean by demonstrating his knowledge of the waters of Isla Margarita, Cumaná, Río de la Hacha, Cabo de la Vela, Santa Marta, Cartagena, Portobelo, and Havana.1

In 1619, Francisco de Cardenas Garay was to have sailed as a pilot with the expedition of Bartolome Garcia de Nodal and Gonzalo de Nodal to explore the southern tip of South America, but for some reason did not reach the ships before they departed from Lisbon. His father-in-law, the renowned Sevillian architect Miguel de Zumárraga, had put up Cardenas’ performance bond for the voyage and was held responsible for the amount when he did not show. The state of Cardenas’ relationship with Bartolome Garcia de Nodal when the two men boarded the Atocha for the 1622 voyage is not known.

An important ship like the Atocha carried two pilots, and Francisco Cardenas de Garay, being trained and licensed, was a skilled assistant to the galleon’s chief pilot, Martin Jimenez.

The pilots needed multiple skills. In order to set a course, have the ship follow it, and chart the progress of the voyage, they had to be able to read and create charts, understand the tables calculated for the declination of the sun, and be familiar with all aspects of the use of their specialized instruments. These instruments included the astrolabe, compass, cross-staff and back staff to measure the altitude of the sun and stars. In addition, they had to be knowledgeable about weather, winds, and currents including their effects on the ship and sails, as well as being familiar with the ports of call and lands to which the ship was sailing.