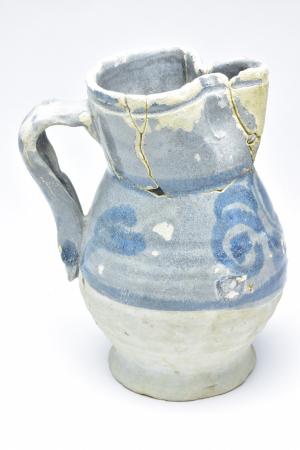 Pitcher
To find out more click on the image above

It is not known who exactly the servants and enslaved people served on the Nuestra Señora de Atocha. Perhaps some worked for passengers, others for ship’s officers. It is also not known what their cultural background was. The Spanish service class at the time was drawn from people of African descent, Indigenous Americans, Spanish or North African Muslims, or even lower-class Spanish Catholics. Enslaved people tended to be Black Africans. Whatever their situation, they were disenfranchised and considered unworthy of formal recognition.

This group of unnamed people would have tended to the needs of their social superiors. They would have prepared food, cleaned living spaces, washed clothes, dealt with waste, and performed other menial duties as part of their daily routine. Enslaved people could also be mariners, and they were sometimes employed as part of a ship’s crew, with their wages being paid to their owners.1

It is important to remember that the limited physical space of a transatlantic galleon served as a great social equalizer. With nearly 300 people spending months at sea in a space roughly 100 feet long, there was no way to avoid interacting with everyone else, no matter one’s status.

Two unnamed enslaved Africans, along with a sailor and two ship’s boys, were commanded to stay on the weather deck and do their best to keep the ship safe during the hurricane. This would have been a hopeless and certainly dangerous duty, possibly assigned to people considered “expendable.” However, these five lowly crewmen, by not being trapped inside the ship as it flooded, were the only ones who were spared drowning. They were able to cling to the Atocha’s mizzenmast until the next day, when a rescue ship took them on board.