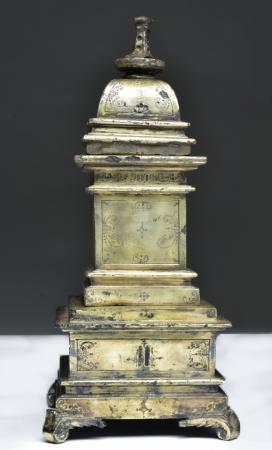 Salt Cellar
To find out more click on the image above

Don Francisco de la Hoz Berrio was Governor and Captain-General of Venezuela from 1616 to 1621. He was born in Spain in 1579, the son of Antonio de la Hoz Berrio and María de Oruña. In 1580, Hoz Berrio’s father was appointed Governor of Trinidad, and the family moved to the Americas. From there, the father led multiple expeditions through the Orinoco River region in search of El Dorado, the mythical “city of gold.”1 In 1595, English interloper Sir Walter Raleigh captured Antonio de la Hoz Berrio during a rival quest for El Dorado.

Upon the father’s death in 1597, Hoz Berrio’s brother, Fernando, continued the search for El Dorado and, in this quest, is thought to have become the first European to see Angel Falls in eastern Venezuela.

Hoz Berrio spent some of his youth in Santa Fe de Bogotá, but later was a resident of Caracas. In 1609, he was issued a license to travel to Spain, and in it was described as a maestre de campo (field officer) in the conquest of El Dorado. Like his father and brother, he was engaged in exploring and pacifying Venezuela for Spain. In 1615, he was appointed Governor of Venezuela by King Philip III. Hoz Berrio was, by all accounts, a good administrator, and one who worked especially hard to help Native people of the region.

Venezuela had a two-tiered social geography at the time: Cities and ports were largely occupied by Spaniards, while the rural areas were populated by Indigenous peoples who were caught in a system of forced labor called the encomienda. Under the encomienda, these Native peoples were required to give some of their time, without compensation, to Spanish colonists who had been granted the lands where they lived. It was obviously a beneficial system for the landowners, but it resulted in the mistreatment and ostracization of the Indigenous population.

King Philip III wanted there to be better integration between the urban and Indigenous societies and to increase opportunities for agricultural enterprises while expanding the reach for Catholic evangelization and the conversion of Native souls to Christianity.2 Through a series of royal directives, Hoz Berrio was ordered to establish Native towns throughout Venezuela, and he did so with zeal. Hoz Berrio spent much of his governorship traveling throughout Venezuela carrying out the plan, and when he was done there were over 100 new Native communities. These communities signaled the beginning of the end for the encomienda system in Venezuela and ushered in a new era for the Native peoples, giving them some autonomy and exempting them from the forced labor requirements that had been in place since the Spanish conquest.3

Francisco de la Hoz Berrio’s governorship ended in July of 1621, and he traveled to Cuba afterward. It is not known why he was sailing to Spain onboard the Santa Margarita.