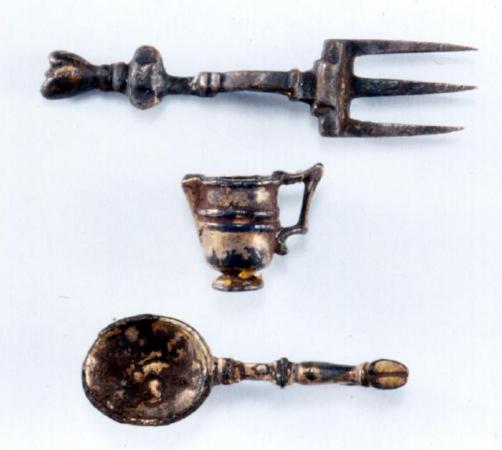 Votive Objects
To find out more click on the image above

Aboard the Nuestra Señora de Atocha, the passenger Diego de Illescas was the only person identified as mestizo, meaning he had both Spanish and Indigenous heritage. This would have been considered identifying information and nothing further is mentioned about him—no physical characteristics, and neither his profession nor position.

Since few Spanish women traveled to the Americas, many male colonists took Indigenous or African wives and partners. Casual or forced encounters also produced progeny. In light of this, the Spanish developed meticulous nomenclature for their racially mixed children. According to the Spanish system, mestizo was the blend that least diluted European heritage, and a mestizo’s grandchildren could be considered fully “Spanish” if both they and their child married European or creole Spaniards. This was important because only “Spaniards” could hold high offices in the colonies.

De Illescas’ seems to have been traveling independently, in that he is not listed as a servant or as part of anyone’s entourage. His reasons for making the voyage are unknown but, since people often had to petition the royal court or the Casa de Contratacion de Indias in person to further their careers in the colonies, he may have been trying to achieve a post as a minor official, possibly asking to follow in his father’s footsteps.

If he had reached Spain, his stay there would not have been without its perils. While people with non-European features were a familiar sight in Spain, their social status might be questioned. Indigenous people born in Portuguese colonies, such as Brazil, could be legally enslaved, while those born in Spanish colonies could not. Because the Iberian kingdoms were combined at this time, it was important for an Indigenous person to be able to prove where in the Americas he or she was from. De Illescas’ probably took his last name from his place of birth, most likely in Mexico. No matter his skin color or looks, his established identity would have afforded him some confidence that his liberty would not be in danger.

In order to thrive in the colonies, de Illescas would have been a Roman Catholic and it is very likely that his mother was one also. No objects can be definitely ascribed to him but, in light of his possible mission, he might have carried items that could be offered in a church for benevolent intervention from saints. The tiny silver spoon, fork, and jug are milagros. For centuries, Southern Europeans used milagros as votives, but a similar practice was common in Central and South America before the arrival of the Spanish. Milagros took many forms, directing the saint’s attention to the specific nature of the request—in this case, de Illesca might have wanted to ask a saint’s aid in keeping him supplied with food and drink on his uncertain travels.

Tupu, or mantle pins, were used by Indigenous women to hold a cloak together at about their shoulders. These tupu are made of hammered silver and etched with Christian symbols, suggesting that the owner was not of the colonial elite, but certainly had some financial resources.