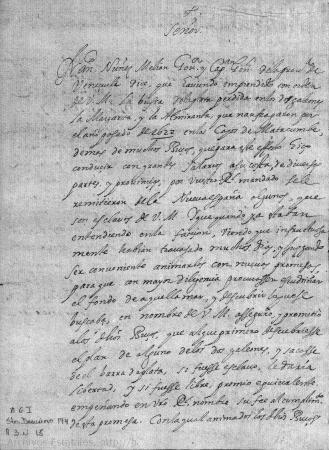 Francisco Nuñez Melián, Salvager of the Santa Margarita
Documents housed in the Archive of the Indies in Seville tell of the Spanish salvage efforts of the 1622 galleons, and they detail the work of Francisco Nuñez Melián. In 1626, to help with the search, the Crown sent Melián a team of enslaved Black divers from Mexico. As the effort to find the treasure commenced, Melián saw that the divers were struggling with the hard work, so, to motivate them, he promised that the first one to recover a silver bar would be granted freedom (with the caveat that he would have to keep working as long as the team was together). This happened later in 1626, when the Santa Margarita was located, and a 40-year old diver named Juan Casta Bañon surfaced with a silver bar from the wreck.

In 1630, as Melián was preparing to transfer to a new position as governor of Venezuela, he wrote to the offices of Philip IV, asking them to please follow through on the promise he had made to Bañon and formally grant him liberty. On October 1, the royal treasurer responded to Melián from Madrid, approving of the award of freedom. It is not known what became of Bañon after his release.

The English translation of Melian’s letter to Madrid:

"Franco Nuñez Melián, Governor and Captain-General of the province of Venezuela, says that knowing that he was undertaking, with Your Majesty's order, the search for the lost silver in the two galleons La Margarita and La Almiranta [Nuestra Señora de Atocha] that wrecked in the past year of 1622 in the Matacumbe Keys. From the more than many dives that further this result were being conducted with great expense at the cost of various parties and provinces, by your royal mandate they sent him from New Spain some of Your Majesty’s slaves, and that when they were now sympathetic with the group, seeing that they had worked fruitlessly for many days, and judging it advisable to encourage them with new promises so that they would more diligently pursue to search the sea bottom to find what was being looked for. In the name of Your Majesty, it was assured and promised to the divers that he who first discovered the wreck of one of the two galleons and took a silver bar out of it, if he was a slave, it would give him freedom, and if he were free, it would be an equivalent reward given in your royal name, your faithfulness fulfilling this promise. With which, it inspired the said divers: they are newly resolved and have been pleased to provide the wreck of the Margarita. The diver who first discovered it and recovered the first bar of silver, he was a Black slave of Your Majesty’s called Juan Bañon, to whom again the assuredness of the promise is confirmed. Likewise, be it known that the said Governor Francisco Nuñez Melián is departing to the province of Venezuela to serve Your Majesty in his government there, leaving the accomplishment of the activities for the search for the missing Almiranta in charge of Ensign Juan de Añuez, because with his example the divers are encouraged to achieve their discovery more carefully. And because of being justly bound to the faith and promise referred to, I grant a letter of freedom to the said Juan Bañon on behalf of Your Majesty with the condition he is to serve in that group as long as it is together, and the said Almiranta is found or not found as is apparent by the evidence it presents. It is humbly asked that Your Majesty be served to order, ratify, and confirm the said freedom, so that the other divers see the reward that is promised to them is true and certain; principally, freedom being a priceless thing for those slaves, and for Your Majesty very little. As for what is achieved: they are encouraged and motivated in the search for this treasure, which it has been much wished for to discover and return to Your Majesty. As their extraordinary diligence has shown, and, as the unceasing expenses and efforts already made are a very beneficial thing to the service of Your Majesty, may he receive mercy.”