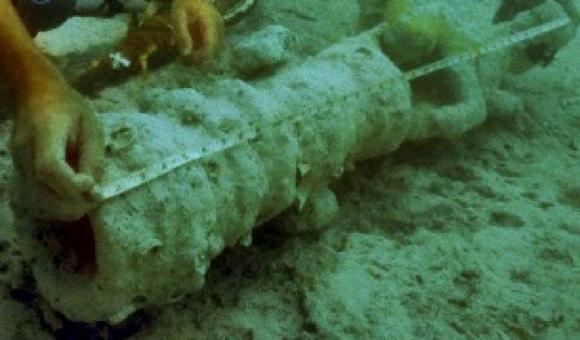 Captain Don Bernardino de Lugo
In 1986, Treasure Salvors divers found a small swivel gun between the wrecks of the Atocha and Margarita; it was mysteriously rigged through its breech end with an iron shackle, swivel-link, and chain. The hand-forged, wrought-iron gun is of a construction typical for the 1500s. It has an overall length of 40.5 inches (102.9 cm) and weighs just over 114 pounds (51.9 kg).

A letter of January 10, 1623, written by the Marquis de Cadereita appears to explain this unusual gun. In it, the Marquis relates the account of Don Bernardino de Lugo, Captain of the troops onboard Santa Margarita:

"One blow from a heavy sea washed him out of the wreck and he found himself floating and swimming on a plank until five o’clock in the afternoon. Then, since the weather had moderated, a shallop from a Jamaica ship picked him up. After boarding the shallop, he buoyed with a cannon a spar and other poles with a pennant wrapped around them to serve as a mark and sign of the place where the two galleons had been lost. Thus, they might be found, and the treasure and artillery aboard could be recovered.”1

Immediately after his rescue, Bernardino de Lugo marked the area of the two wrecks with a spar-buoy anchored by a cannon. The swivel gun found between the two wrecks, oddly rigged with a shackle and chain, fits the described placement and design of de Lugo’s improvised marker. The gun appears to have come from the shallop, or boat, of the Santa Cruz, a ship of 100 tons (the only one in the 1622 fleet known to have traveled to Jamaica). The outdated gun from a small, utility vessel would have served perfectly as a marker weight that was likely to be lost or damaged in the sea.