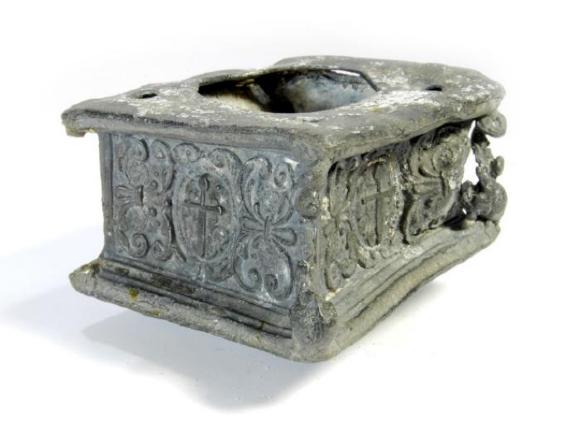 Inkwell
To find out more click on the image above

Although de Lugo was sailing on the Santa Margarita as captain of the troops, he had made other transatlantic voyages in different leadership roles and had been granted knighthood in the Order of Santiago in 1617.2

In 1620, he sailed as admiral of the Tierra Firme (South American) Fleet, and in documents settling his estate, he is described as “Royal Armada Captain.”3 On the Margarita, de Lugo led the 73 soldiers assigned to protect the galleon, but his experience at sea would have made him an equal to the ship’s master, Pedro Gutiérrez de Espinosa.

A biographical sketch of de Lugo, written in 1626, says:

“The excellent and very courageous Don Bernardino de Lugo y Navarra, of the Order of Santiago, captain of infantry and admiral who, by his great nobility and rare and singular virtues, is regarded fondly by all who know him, and to whom he is owed many obligations. This gentleman embarked in the galleon Santa Margarita, in Havana, on the sixth of September 1622. At head of Los Martires, in the islands that they call Matacombe4, the ship was overcome by a storm that delivered more wind than it could handle. The galleon was unable to steer, so the anchor was set, and the sails furled, but the bad weather continued, and the ship went crossways, broke to pieces, and many people drowned. But, as God our Lord kept this gentleman for greater things, he was saved by holding on to a plank in the water for an entire day, while carrying in his arms a ship’s boy, whom he saved from drowning.”5


Before returning to Havana with his rescuers, de Lugo marked the site of the shipwreck with a buoy so that salvagers would be able to find it.

In 1624, off Jamaica, de Lugo led a squadron of galleons against seven English corsairs and recaptured a prize ship they had taken.6 Eventually, the hazards of the sea caught up with him: while returning to Spain from Mexico in 1626, he drowned in a shipwreck near Bermuda.7

An epic poem was written about the 1626 tragedy, a portion of which is dedicated to the death of Bernardino de Lugo:

Traverse the salty waters,
lie down Christian Mars,
When three strong cannons
echo resonantly from a galleon, but they were
the funeral offerings
for that great don Bernardino
de Lugo, that they make for him in San Juan,
which came to be his parish
For the one that made so many voyages
serving his king,
and already they serve him from jasper
the roe of the North Sea,
where its nymphs, they sing.8